Canine Capers of Chester, founded in 2012, is a family run business offering the very best of care for your canine best friend when you cannot be there. Whether you are away on business, living it up on holiday or simply busy with day to day life, we are here to ensure your dog’s needs are met to the highest of standards. We offer 1 hour pack walks, doggy daycare and home from home dog boarding. All the dogs enjoy long walks in the beautiful countryside around Chester, socialising within our packs and with our resident dogs.

Our Passion and Assurance

Our work really is a true labour of love and we feel so lucky to be able to spend our days out in the countryside surrounded by so many waggy tails and smiley faces!. As well as highly experienced handlers, Canine Capers also has canine first aid certificates, A diploma in dog communication, is fully insured and is 5 star licensed by Cheshire West and Chester council.

Having grown up with a huge range of animals from hamsters and rabbits to dogs and horses, I have always had an enormous passion for all things 4 legged! All my dogs have been rescue dogs and I take huge pleasure out of rehabilitating them and seeing them enjoy the best life I can possibly offer them. I enjoy the challenges so much that, I began fostering boxer dogs for various boxer rescues, these dogs came from a whole range of situations but inevitably, they each had their individual behavoural and health hurdles to overcome. I loved nothing better than working with these dogs and, eventually, seeing them trot off to their new owners knowing they would now be safe and forever loved. It then seemed to be a natural progression to work full time with dogs. So, in 2012, I made the decision to leave the corporate world of Estate Agency and founded Canine Capers of Chester and the rest as they say, is history.

Having grown up with a variety of dogs, including working gun dogs, James is another dog enthusiast and particularly enjoyed training with his working dogs. Having always taken an active role, alongside Emma, in rehabilitating the many rescue and foster dogs, James also found the rehoming process hugely rewarding and we realised we made a pretty good team!. Having helped and supported Emma and Canine Capers from it’s inception, as the business grew and began to require a second handler, James jumped at the opportunity to leave his job and join Canine Capers full time in 2015 and has never looked back!

Maddie Aka The Boss

Our lovely Maddie was a rescue girl from Manchester Dogs home and joined us in January 2007 at approx 8-10 months old having been handed in as “unwanted”. Well, it didn’t take long to understand why!! We had many many behavioural problems on our hands and it was a very long road, with plenty of “what have we taken on” moments! That’s all well and truely in the past these days and Maddie is so loving and well mannered, she’s a total pleasure to share our lifes with. Maddie is undoubtably the pack leader or “matron” as we’ve come to know her and some days I don’t know where we’d be without her, she keeps all the packs in line! 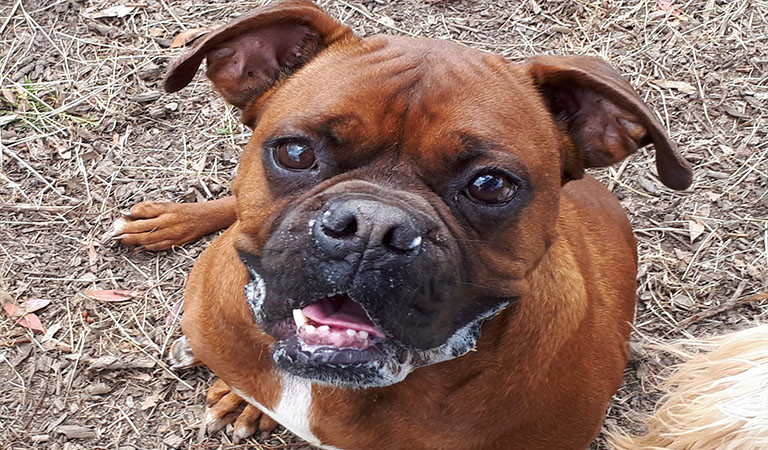 Well, what can we say about our little pocket rocket of a boxer boy!! His story is a long and harrowing one so I’ll keep it brief. Having suffered so much abuse in his home country of Spain, Baxter was found in the streets of Madrid in June 2016 with both his legs cleanly broken courtesy of a humans boot! He was nursed in a foster home in Spain, whilst undergoing multiple surgeries on his legs, finally, in August 2017, he was deemed fit to travel to us and so, he became the 3rd member of the resident pack. His health and behaviour have taken an incredible amount of work but we are both so proud of how he has turned out and nothing gives us more pleasure than seeing him flying around with the pack, he really does grab every opportunity we give him and his zest for life is infectous! He’s a bit of a celebrity too, with facebook followers all over the world, his full story and journey back to health is available on his facebook page “Baxter the unbreakable boxer dog”.